It’s hard to find anything cuter than a baby animal and sometimes it's hard to find the correct term for a baby animal too. On the one hand, many young animals share the same name - there are lots of cubs and pups out there. On the other, there are some very specific terms for infant animals, like puggle. Discover common baby animal names (and some not so common) so you’ll know exactly what word to use for young creatures. 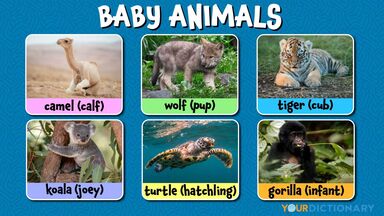 Some baby animal names are the same for multiple types of animals.

The term calf is probably most commonly known as the name for a baby cow, but it is actually used for several types of baby animals.

The word pup is used for many baby animals, including (but not limited to) dogs, several rodents and sharks.

Cub is the name for most baby big cats as well as some other animals.

Baby marsupial animals are referred to as joeys.

Several types of baby animals are referred to as hatchlings. These animals all hatch from eggs.

Did you know? The term hatchling can also be used for some baby birds, but only for the first few days they are alive.

Not all names for baby animals are used for multiple kinds of critters. Many animal names are specific to a particular type.

There are so many terms for newly born animals! Now that you know what to call many baby animals, it’s time to boost your knowledge of science with regards to living things. Start by reviewing a list of names for groups of animals. From there, broaden your knowledge base by learning about how animals and plants are classified through the taxonomy of living things.