CCVC stands for Consonant Consonant Vowel Consonant. This is a spelling pattern that many English words use. CCVC word lists help with the acquisition of English language skills. Keep reading to find CCVC word lists as well as important phonics information and pointers. 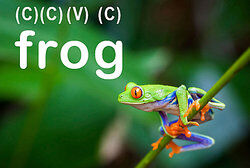 CCVC words are different from CVC words, which follow a consonant-vowel-consonant pattern. Beginning readers who have mastered CVC words may be ready to move on to these word lists.

CCVC words have the following qualities:

There are two main categories of CCVC words, depending on their beginning consonant sounds. The following CCVC word lists provide a sampling of what words fall under these classifications.

If you’d like to print this list for easy reference, download and print out the PDF below. It’s a great way to keep students practicing their CCVC words.

Some CCVC words that start with consonant digraphs include:

One reason that CCVC words are considered among the most difficult regular words is the consonant blend at the beginning. As beginning readers and spellers tend to sound out individual sounds they associate with each letter, the learner may struggle to create a blended sound to produce the correct sound combination that matches the word.

Taking the word frog, for example. A beginning reader may sound the letters out loud one at a time: /ef/ /ar/ /oh/ /gee/. A possible initial pronunciation could be phonetically described as /ef/ /rog/. The early reader has already achieved a basic mastery of CVC words. It is easier to process frog as the initial consonant sound followed by a CVC construction (rog) that makes sense to them.

Regular evaluation of basic phonic mastery and spelling can determine normal childhood language development. It’s important to investigate and evaluate failure to achieve a basic mastery of phonetics, as this may indicate learning disabilities or neurological factors. Use the above lists to regularly check students’ progress when it comes to reading CCVC words.

Phonics remain a staple of early spelling and word recognition and CCVC words can present early challenges to young learners. Try a graduated approach to these more complicated regular words by building on the consonant combinations. You can then teach the incorporation of the blends into whole words.

Beginning readers who can read CVC and CCVC words are on the right track toward reading success. Connect your phonics practice sessions with lessons on sight words. Or, if students are ready to show what they know, use these printable reading comprehension worksheets in your next reading lesson.