Three letter words are the foundation of English; fundamentals like “and” and “the” make the language work. They occur in virtually every conversation. The following list of common three-letter words -- organized by part of speech -- are words that we use often. These words make up a big part of our language whether we are talking, texting, emailing or writing, enabling us to construct sentences and communicate effectively. 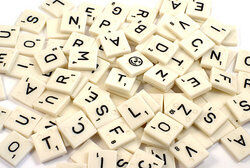 Now that you have thought about this, do you play Scrabble? Think of the ways these common three letter words could help you earn points and possibly win the game. That three letter word could be the one word that makes you Scrabble champion.

Adjectives are descriptive words that explain or specify things about nouns. Adverbs are distinct from adjectives in that they modify verbs, adjectives or other adverbs, not nouns. However, many three letter words in English can function as both.

Articles are a special kind of word in English. There are only two in the whole language, and they are used to differentiate between a specific noun and a general one.

Conjunctions are words that hold sentences together. Being some of the simplest English words, they often have simple, three-letter spellings.

Prepositions connect words or phrases to particular other words. Unlike conjunctions, prepositions describe the relationship between parts of a sentence.

Pronouns are words that replace nouns in a sentence. This avoids repetition of information the reader already knows.

Verbs express an action or occurrence.

FTW is shorthand for “For The Win,” one of many three letter abbreviations that also appear in English. Check out the rest at our list of common abbreviations in English. Three letter words are among the most basic, and therefore most important, components of the English language. Learning them is a vital step in mastering English.