Learning about space can be exciting and confusing. Start your discovery of astronomy with a cool and simple glossary of space terms kids and adults can understand. 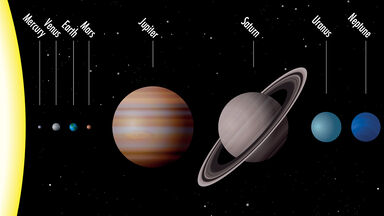 Some of the most familiar celestial bodies are the planets, especially those in our solar system.

Explore some of the brightest objects in space with a vocabulary list related to the sun, moons, and stars.

Planets, moons, the sun, and stars aren’t the only things you can see in space.

Figuring out how to accurately describe space can be a challenge. This list of descriptive space vocabulary can help you find the right words to use.

Astronomers, or the scientists who study matter and objects in space, use cool tools and measurements to explore the universe.

When you learn new words about astronomy and space, you embark on your own journey of discovery! Continue your space exploration from home and discover fun space facts like when Galileo discovered Jupiter or browse a resource like a list of comets. From there, explore some fun space facts about planets and galaxies. You can also check out more extensive astronomy dictionaries to learn more space words.