Common Corporate Buzzwords and What They Mean

Corporate buzzwords have always been a part of workplace vocabulary. However, as life and work become more intermingled, these industry phrases have entered our everyday lives. Read a list of common corporate buzzwords and determine their meanings both in and out of context. 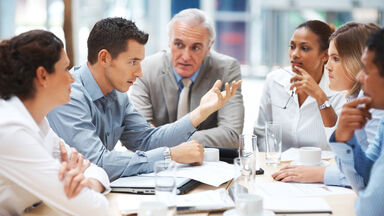 Common Corporate Buzzwords and Their Meanings

Buzzwords are popular in the workplace because they allow an employer to express shared values through jargon. They can also make suggestions about job performance without sounding too harsh. For example, an employer may say “we value team players” instead of “you should collaborate more with your team,” which both asserts the company value and avoids criticizing you directly.

However, sometimes these buzzwords are used so often that they lose their meaning. Here are some common corporate buzzwords that you may have heard around the office recently, as well as their meanings.

People use ballpark to mean “estimate of an amount.” They may want to know a ballpark number based on your best guess with the data you have at the time. You may even hear it as a verb: “Let’s ballpark the quarterly figures.”

A company’s standard method of operating is known as its best practices. Employees are typically expected to adhere to these best practices in their work going forward. However, while some best practices are ingrained in company culture (such as dress code, writing style guide, and customer service), others are known to change with the relevant trends.

The bottom line used to be the sum of income and expenditures in accounting. Now it means the final result, after everything is said and done. Your employer might ask you for the bottom line when making a presentation to the rest of the team, which would be a summary of the most important point.

In an online world where nearly any product or service is readily available, one’s brand becomes even more important. Branding is the process of making a company’s brand and services distinct from others. The goal is to be as “on brand” as possible.

While it’s important to be innovative in the workplace, you also want to know what already works. That’s where the term data-driven comes in. Data-driven ideas focus on the research and trends of a product or service to determine where to go next. They then use this data in the next stages of the project and constantly go back to the research to make sure they’re on the right track.

Eating Your Own Dog Food

Sometimes a company’s best customers are its employees! The phrase eating your own dog food (which is not literal and is also known as dogfooding) indicates that employees use the company’s products and services themselves. It’s both a way to ensure quality control before public release and to assure customers that the company’s own employees approve of its products.

Many companies want their employees to feel empowered. Workplace empowerment might include the ability to assert one’s needs to a supervisor, to alter a workplace as desired, or to make autonomous decisions. Empowered employees are usually happier – and, as a result, more productive in the workplace.

Every company wants to make an impact in the modern world. Describing products as impactful means that they are different from what other companies are doing, and that they will attract (and keep) more customers as a result. The word is more popular with marketing experts than with grammar sticklers.

Leverage comes from the accounting practice of trading one’s assets for a more favorable financial situation. In the business world, leverage has more to do with influence. Employees can leverage their skills for a desired promotion, colleagues can leverage influence to work together, and a company can leverage customer loyalty in a riskier sales campaign.

Monetization means just what it sounds like: making money. But “finding opportunities for monetization” sounds more inspiring to employees than “figure out how to make more money.” Companies can monetize parts of their operation, such as selling ad space or creating a sales app, that they hadn’t previously used for income.

Think of the modern corporate world balanced on a scale. When everything is in balance and the needle is in the center, it’s safe, but not very interesting. A needle-mover can move a company from its safe place in balance to a riskier (but more rewarding) place in the customer world.

Though this buzzword may sound inappropriate, open kimono simply means to be transparent about your plans and intentions. Executives typically use this phrase with investors when describing the inner workings of their companies. You may also hear it as “opening the kimono” when used as a verb.

Are you making a list and checking it twice? You have to prioritize (make priorities), itemize (work on one thing at a time), and then become proactive (acting before being asked) in ticking the items off the list, or putting them to bed.

Pushing the envelope means “to approach a boundary.” Employees who are encouraged to push the envelope should try to come up with newer, more daring ideas.

A paradigm shift is what one hopes to achieve by pushing the envelope. A paradigm is a structured way of thinking, so shifting that mindset is desirable for an innovative workplace. No one wants to hear the same old ideas over and over.

If you think the end justifies the means, you might be a results-driven (or results-oriented) executive of a big company. Being driven by results indicates that you keep an eye on current trends and what actually works in the real world.

It sounds like a noble effort to rightsize your company. But in reality, rightsizing is a synonym for downsizing or laying off employees. In the best case scenario, employees may be reassigned to different departments or job titles. It almost never indicates that a company should increase its staff.

Anyone who holds a stake in the success of the company – employers, board members, customers, employees, investors – is considered a stakeholder. Many companies try to avoid making decisions that affect only one group of people by considering the rest of their stakeholders.

Employers who desire synergy in their employees want collaboration and idea-sharing. The word is a portmanteau that combines the words “synthetic” and “energy” – essentially, creating something together that is bigger than either of the team members alone.

Technology used to be something that scientists devised and businesses sold. Now it's gone out from the assembly line into the language so that practically everything is "technology-based." It makes products and experience seem newer and more modern. You may also see the same effect from the phrase “21st century.”

The Value of Precise Language

Many corporate buzzwords have an intentionally unclear meaning. If precision is important, using specific business lingo probably isn't the best way to frame your ideas in those words. Check out a resource about using the right words if you’d rather use clear communication than popular buzzwords.