Different Words for the Simplest of Things: Make Even Walking Sound Exciting

Whether you’re a bestselling author or a chatty friend at brunch, you love telling a good story. But a key part to telling a story is keeping your audience’s interest, and you’re not going to do that with the same old boring turns of phrase. Time to call the bank — you’re about to pick up some serious ten-dollar words. 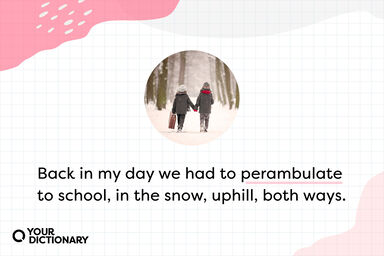 Happy children walking together while snowing with perambulate example
Advertisement

Rhapsodize Instead of Talk

When you have an amazing conversation on a date and you’re talking to your friends about it afterward, saying, “We talked for hours” sounds pretty anticlimactic. Try “We rhapsodized all night” to impress your well-spoken friends (and intrigue the less-loquaciously inclined).

Example: Hank rhapsodizes about The Wire so often that I thought it was still on TV.

We all do the same thing first thing in the morning: We wake up. But you don’t have to! You can bestir instead to paint the picture of a sunny bedroom and a gentle morning yawn (while glossing over the screeching snooze alarm that you’ve hit for the fifth time).

Example: You should never bestir a sleepwalker.

Don’t Eat Your Dinner, Gormandize It

Have you ever had a meal so good that you wish you could eat it again? You didn’t just eat that food — you gormandized it with the same appreciation a dog gives to a juicy steak. Possibly with the same amount of slobber.

Example: We can gormandize some chili burgers and fries on the way to the game.

Why Walk When You Can Perambulate?

Everyone describes walking as “walking,” but you don’t have to. Use perambulate to describe anything from a leisurely stroll down the street to a strenuous hike up a mountain (only if you want to brag).

Example: Back in my day we had to perambulate to school, in the snow, uphill, both ways.

Do You Hear What I Auscultate?

Example: I bought noise-canceling headphones so I don’t have to auscultate my colleague’s 80s power ballads.

Your friends love your travel stories, but there are only so many ways to say “And then I traveled to Arizona” or “I’d love to visit Thailand.” Use peregrinate the next time you discuss a recent bout of wanderlust.

Example: After college, I plan to peregrinate around Europe until I run out of money.

You Don’t Know It, You Cognize It

Rather than telling your boss “I know that the project is due tomorrow, you’ve told me a million times,” say “I cognize it.” They will be impressed (and maybe confused) enough to back off, leaving you time to actually work on the project itself.

Example: We cognized that the neighbors were getting a divorce when his clothing started raining from their bedroom window.

Example: Martin descried the speeding seagull just seconds before it dive-bombed him and stole his hamburger.

Even if you’re naturally silver-tongued (or silver-penned), you can welcome a few hearty additions to your lexicon. For more ways to meliorate your manuscripts, check out: