70+ Irish Slang Words and Phrases That Are Great Craic

Whether you’re planning a trip to Ireland or just a jaunt to your local Irish pub, knowing some Irish slang words and phrases can help you connect to Irish culture. Brush up on your Irish slang with these colorful examples. 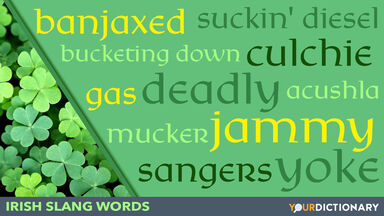 The exact meaning and usage of these words and phrases from Ireland may vary from one area to another, so be sure and pay close attention to the context in which they're being used.

Be sure you fully understand these Irish slang insults before you start adding them to your vocabulary.

If you're Irish or love Irish culture, you might opt to use one of these unique terms of endearment for family members, friends or romantic partners.

The Irish have lots of slang terms that can be used to indicate that someone is very drunk. The alcohol may run short, but the Irish slang for being drunk certainly never will.

Now that you're clear on some of the informal colloquial terms that are popular in Ireland, you're ready to travel to the Emerald Isle. You might also want to learn a bit about the basics of Gaelic before your journey to Ireland. If you’re planning a trip to the U.K., get to know some British slang.