Let's Bring Back These Obscure Christmas Words. You Know, For Fun

If you want to have an amazing Christmas party, make sure to decorate with lots of clinkerbells — and leave your doniferous guests full of bellycheer from your perfect bubbly-jock! If you don't know your rumballs from your mulligrubs, you may need to brush up on some awesome (but sadly underused) Christmas words. 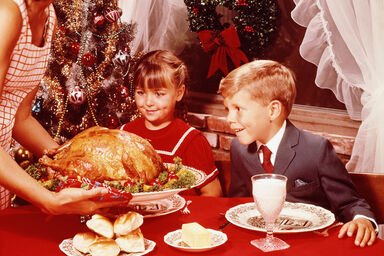 What's another word for those Christmas-sweater-wearing, carol-humming, bell-earringed people in your life? It's apolaustic! An English adaptation of the Greek word apolaustikos meaning "to enjoy," apolaustic (pronounced ap-oh-LAWS-tick) describes a person who is completely devoted to their own enjoyment.

You know that feeling when you've had maybe one too many bites of Christmas dinner, but you could totally go for more and you've never been happier? That's bellycheer — a 16th-century English word that describes the utter satisfaction that comes from fine dining and holiday gluttony.

Example: The guests leaned back and unbuttoned their pants, completely full of good food and bellycheer.

What do you do with those extra branches that you cut off the bottom of your Christmas tree? If you drape them on top of a table or cabinet, you're bouning — a Middle English word meaning "to decorate with evergreen branches."

Example: Let's boun the office lobby so everyone gets in the holiday spirit!

This incredible term for "male turkey prepared at Christmastime" comes from 18th-century Scotland. Bring bubbly-jock back to the dinner table for some old-fashioned Christmas cheer!

Example: After we stuff the bubbly-jock, we'll wait a few hours for it to be ready.

Another excellent Scottish holiday word is bummock (BUM-muck), a 19th-century term for a huge amount of booze made for (and consumed) at a Christmas party. It can also mean "Christmas party thrown by landlords for their tenants," but these meanings aren't mutually exclusive.

Example: The party guests drank the entire bummock before we could even serve the bubbly-jock.

Could there be a cuter name for an extremely sharp piece of ice than icicle? Yes, there can — it's clinkerbell, an 18th-century archaic term from Northern England that describes these dangerous ice daggers in a charming, fairy-like way. It’s also known as a conklebell, but that’s not nearly as fun to say.

Example: Don't look straight up at the clinkerbells or you'll lose an eye!

What happens after too much bellycheer? Crapulence happens. It's that yucky, queasy, morning-after feeling when you had too much to eat or drink last night. Crapulence is a 17th-century English adaptation of the Latin word crapulentus — “extreme drunkenness” — which is a pretty accurate description.

Example: A wave of crapulence washed over me as I woke up in my own bathtub, reeking of peppermint liqueur and bubbly-jock.

When your mom distributes the Christmas dinner leftovers to you and your siblings to take home (and they always seem to get more than you do!), it's time for crawmassing! Crawmassing is the act of picking through holiday leftovers and is arguably the best part of Christmas itself. It likely comes from the 17th-century English word comassing, which means “begging your friends and neighbors for food.”

Example: I sneaked into the kitchen at midnight, intent on crawmassing my way through the leftover Christmas pie.

Ever walked into a party with a wrapped box under your arm? You're an incredibly doniferous guest! Doniferous (pronounced do-NI-fer-us) is one of those great, obsolete words that sounds super fancy but actually only means "bearing gifts." Just don’t mix it up with coniferous — that’s a pine tree.

Example: Doniferous in mood and manner, we placed our Secret Santa gifts under the tree before grabbing a drink at the bar.

Back in the 18th century, a gawby market was a fair held on the first day of trading after Christmas. But it works really well to describe all those sale-hunters at modern malls and shopping centers on December 26th as well! Sort of like a "Black Friday" for the Christmas season!

Example: Paul always hates his presents, so he heads out to the gawby market first thing in the morning to exchange them all.

Do you travel for the holidays? Maybe you’re a snowbird who escapes freezing winters on a nice, warm beach. If so, then you hiemate — a 16th-century word meaning "to spend the winter somewhere else." Don't mix it up with the similar-sounding hibernate, though (that would be an awfully boring Christmas)!

Example: My family always hiemates in Fiji because we can't drive in the snow.

If you were to guess that hogamadog refers to the person who wants all of the presents under the tree, that would be a great guess. But you'd be wrong — it’s an old Northern England word that means "a large ball of snow that you make by rolling a smaller ball of snow in more snow." Think of making a snowman and you've got the hogamadog concept.

Example: By the time the tiny snowball rolled down the hill, it had become an unstoppable hogamadog, hurtling toward the town with unbridled menace.

Julebukking is both a cool word and a cool tradition that we really need to bring back. It refers to a Scandinavian practice that is basically trick-or-treating for Christmas: disguised and possibly intoxicated celebrants, sometimes carrying a goat head, knock on their neighbors' doors to receive treats (and/or more alcohol). The neighbor then has to guess who's behind the disguises and join the group for the next house!

Example: After a long night of julebukking, we put the goat's head away and rummaged through our bag of treats.

The word mufflements just looks all warm and cozy, doesn't it? There's a reason for that: It's a regional English word meaning "thick, insulating clothes" that one wears during the winter. If you're hosting a Christmas party, be sure to have a room for guests to shed their mufflements!

Example: Luckily for me, my mufflements protected me from the onslaught of snowballs being hurled from the other side of the street.

When you call a Christmas hater "Scrooge" or "a Grinch," you're describing someone feeling the mulligrubs. The 16th-century British word mulligrubs is a very cute way of saying that a person is in a sour mood or seasonal funk. It can also refer to stomach discomfort — again, possibly the crapulent result of too much bellycheer!

Example: After Sylvia lost her gift in the office White Elephant exchange, she was in the mulligrubs for the rest of the party.

Mumming is an Irish and English folk tradition of dressing up and performing plays in their neighbors' houses. The hosts must guess the mummers' identities and then they all partake in food and drink. While mumming is still a thing in parts of the U.K., the closest the rest of us get is a boozy game of charades!

Example: We can't go julebukking this year because we'll be mumming for the neighbors.

Those who speak French (and those who love wine) probably already know that pourboire means "for drink." Pronounced poor-BWAR, it's the monetary gift bestowed with the intention of being spent on drink. Basically, "here's some cash for your next hot toddy."

Example: Our company Christmas gift was a pourboire for the holiday party, and absolutely no one complained.

A Manx word describing "the first person to enter your home on New Year's Day," the quaaltagh (pronounced QUAL-tuck) is supposed to bring you luck for the coming new year. However, there are some rules to follow: this person has to be dark-haired and preferably not female (although asking guests to abide by these rules may bring about its own bad luck). Quaaltagh also refers to a custom similar to modern caroling: a group goes from door to door, singing and asking for food and drink.

Example: My cousin likes to be the quaaltagh every year, but I think he just likes to crash at our house after a wild New Year's Eve.

Something about a Christmas tree and a pile of gifts makes every kid want to run and jump around like crazy! This English word refers to Christmas gambols — running and somersaulting playfully during the holidays. The best thing about ramracketting is that it's not exclusive to children, so this year, ramracket to your heart's delight!

Example: Marcia planned a quiet, peaceful Christmas morning, but with the kids ramracketting around the house at 5 a.m., her plans were for naught.

While a "rum ball" is a delicious holiday treat made with rum and chocolate, the word rumball is an 18th-century name for Christmas Eve. It only coincidentally sounds like the word rumble, which hopefully doesn't describe your upcoming Christmas Eve dinner!

Example: We were sorely disappointed to learn that our Rumball Feast invitation was not, in fact, a feast of rum balls.

You know this word — it's from that one old Christmas carol. But how do you say it, and what does it mean? Wassail has three very Christmassy meanings: spiced ale or cider, festively drinking, or caroling from door to door. The best part is that you can do all three at once! (P.S. You pronounce it WAH-sul, not wuh-SAIL.)

Example: I didn't even care about losing the trivia game, thanks to the delicious wassail prepared by my brother's new girlfriend.

Xenium may sound like it belongs on the periodic table of elements, but it actually belongs under the tree! It comes from the Greek word xenia, meaning "hospitality," and refers to a gift given to a guest by a host. The next time you're giving out a party favor at the door, you're actually giving out a xenium (or xenia, if it’s more than one).

Example: The last time I went to my boss's house for Christmas, he gave me the swankiest xenium ever.

Have you ever frantically wrapped presents during the late-night hours of Christmas Eve, or rushed through the stores right before they close for the holidays? Those who leave Christmas duties to the last minute earn the title of yuleshard (or, more insultingly, yule-jade). Yule comes from the old English word geōl (“Christmastide”) and the Scandinavian jol (a pagan end-of-year celebration), and shard being a piece of something (an undone task, in this situation).

Example: I was such a yuleshard this year and forgot to order my gifts on time, so I did all my Christmas shopping at the grocery store.

This Christmas, give the ultimate gift: words! Okay, that may only be a tempting gift if you're a grammar nerd or a dictionary buff. But if you are, check out these Christmas treats: