Knowing when to pronounce the “t” in an English word versus when the letter “t” is silent is an important key to learning how to properly pronounce a number of words. Discover some of the most common silent “t” words and you’ll be on your way to mastering how to say these tricky terms. 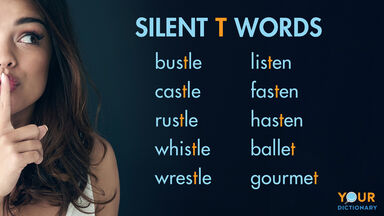 Many words with silent “t” have -stle together at the end of the word. The phonetic spelling of each word helps you pronounce it properly.

Many words with silent “t” have -sten together at the end of the word.

The “t” is not pronounced in some words that have an “f” and a “t” side-by-side in the middle of the word.

*The word often is unique, as it can actually be properly pronounced with or without a silent “t,” based on the preference of the person who is speaking. When spoken with an audible “t,” the phonetic spelling would be off·ten.

Words With a Silent T at the End

Words that are French in origin and end with the letter “t” are examples of words where the final letter is not pronounced.

Other Words With Silent T

A few words in the English language that have a silent “t” don’t really follow any specific rules. For these words, the best option is simply to memorize how to properly pronounce them.

Alternate Forms: Plural or Past Tense

There aren’t many absolutes in English grammar. The same is true for pronunciation rules — really just general guidelines rather than rules— for how to tell if a “t” in a word should be pronounced or not. While the circumstances described above are examples of times that the “t” is usually silent, these guidelines do not always apply.

Practice your skills when it comes to recognizing words that have a silent “t.” Complete the practice questions, then check your answers below. Don’t peek at the answers until after you have answered the questions on your own.

From each pair of sentences, choose the option that includes a word with a silent “t:”

The correct answers are:

Knowing when to pronounce the “t” in a word versus when it is silent can be quite challenging. Now that you are aware of the general guidelines for making this distinction, consider exploring some other pronunciation difficulties. Start by reviewing the most often mispronounced words and phrases in English. This can help you increase your vocabulary as well as your pronunciation skills. Then you can explore another popular silent letter with words that end with a silent “e.” From there, dive even deeper to discover the answer to the question, "Is the S or the C silent in scent?"