A list of cool words from the 70's... wouldn't it be nice to have such a thing so you could reminisce about the old days when you were still a teenager and the days when life was about fun and games. You had no worries except for how you were going to get to the great party over the weekend. The slang of the time and the words reflect this great atmosphere and can even bring you back to those carefree days.

A list of cool words from the 70's can take you back to the days of the 70's! Bell bottom pants and 8 track tapes. Peace, love and harmony may not be the words you are probably remembering when you think back to the 70's. This was the days of demonstrations and war riots. These were the days where the Beatles and Elvis had the girls screaming wildly and throwing unmentionables upon the stages.

As you can see, many of these words are still used today and even have the same meaning as they did in the 70's. As the peace and love movement persisted form the 60's and the 70's gave way to the rampant consumerism of the 1980's, the laid back atmosphere remained throughout this time as teens embraced cultural freedom. Although hippies and the hippie culture began to wan around the middle of this decade, many of the ideas of feminism, peace and love still persisted and colored the slang language of this time in American history.

Slang evolves and changes as each new generation creates their own language that parents and authority figures just don't understand, but many of those words persist and become part of the cultural vernacular of society as a whole.

Today, even your parents know just what "awesome" and "cool" mean, but that doesn't make the words any less useful of as expression of pleasure. 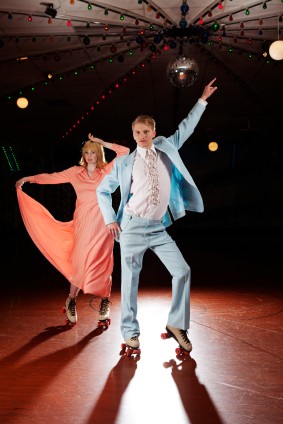 Roller Disco Rink As List of Cool Words from the 70s