It would probably take several days to compile a complete list of descriptive words for appearance. You've got the outward appearance of people, the various ways in which their emotions and traits take shape, and let's not forget the entire world around us: people, places, and things don't even begin to cover it. 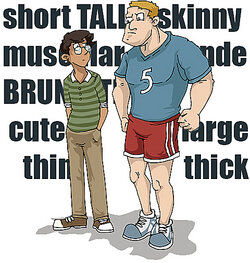 Yet, it's wise to embrace all kinds of descriptive words. Typically, we're talking about adjectives, but there are other descriptors in the English language, too, i.e. adverbs and gerunds.

The point is, we can spark genuine magic in our writing with the proper descriptors. Ready for a small slice of the pie? Together, let's examine over 130 of the most descriptive words in the book.

What follows is a list of descriptive words for appearance. We've broken it up into different categories, even though it's quite difficult to take the entire world and break it into a handful of subgroups. There's too much goodness all around us.

Nevertheless, we've created some sort of order to the universe. Let's see which descriptors will jump off the page and into your memory bank.

Whether you're tall, short, blond, or brunette, there are a wealth of adjectives to describe people's outward appearance.

You'll notice that some of these adjectives are capitalized. That's because they're proper adjectives. They're derived from proper nouns, usually denoting people, places, or languages.

Let's take a look at words that show someone's mood or temperament:

Descriptive Words for The Appearance of Things

Life is full of "things." Objects abound in our homes and in the world outside. Let's take a moment to consider various adjectives that can be used to describe the appearance of objects or the things, like fashion styles, that are all around us.

Other Types of Descriptive Words

Gerunds, the "ing" form of nouns, also describe how someone is appearing. In better terms, they describe the manner in which someone is acting. We can say "He is running" or "She is laughing." In these examples, running and laughing are both gerunds.

Such a Wide World Around Us

The English language is almost as wide as the world around us. There is a multitude of ways to describe a multitude of appearances, inward and outward. Some aspects of appearance are easy to define, some are trickier or more subjective. How would you define sexy, for example? There are many ways.

Are you ready to keep adding to your adjectival memory bank? Then take a scan through some examples of personality adjectives or a list of positive adjectives. The next time you sit down to write, hopefully, the right descriptor will come to mind, knitting your prose together with perfection.