Which is more intriguing — a dark, spooky night or a pitch-black, starless, ominous night? Would you rather eat a delicious cake or a mouthwatering, sugar-sweet chocolate cake? Using descriptive words makes readers feel like they’re in your scene instead of just reading it. When you’ve got the proper list of descriptive words, you can easily turn handsome into chiseled or pretty into dazzling. 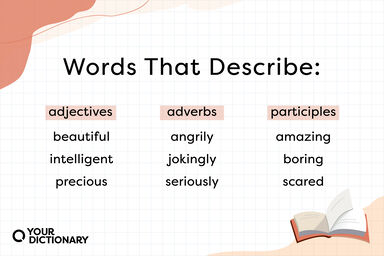 Adjectives are descriptive words that modify nouns. They’re what you need to tell the difference between an acrobatic cat, a delirious cat, and a precious cat (or maybe a cat that’s all three).

Use an adverb to describe an action rather than a noun, or if you want to add even more detail to an adjective. Most adverbs end in -ly (though not all of them), and they’re helpful ways to strengthen your writing.

Using Descriptive Words in Your Writing

Descriptive words help paint a picture in the reader's mind. The sentence "It was windy," might give the reader information, but it's not very descriptive. Consider how much imagery you can add with the words gusty, torrential, breezy, or windswept in front of your nouns.

Using illustrative descriptors makes your writing impossible to put down. Whether you're using descriptive words in poetry or informational writing, there are always opportunities to make sentences more vivid.

Describing Our World With Words

When it comes to using descriptive words, variety is key. Go beyond the list of adjectives, adverbs, and participles above to help you set the scene with just the right imagery.