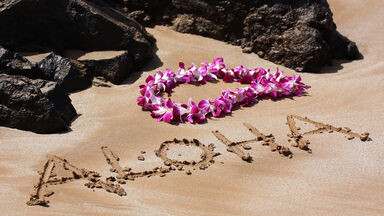 Are you wondering how some of these terms might be used by English speakers who aren’t also fluent in Hawaiian? These example sentences can help you get a good idea of how to incorporate these terms into everyday English.

Now that you have a list of English words of Hawaiian origin, maybe you would like more information about Hawaii. Hawaii became a state in the United States of America on August 21, 1959. It is located 2,000 miles from the mainland of the United States. Hawaii is the only state that is a group of islands in the middle of the Pacific Ocean. Hawaii's nickname is The Aloha State.

Here is a list of some of the official symbols of Hawaii:

Hawaii is a part of the Hawaiian Island chain, which is a huge chain of islands stretching over 1,500 miles. The whole archipelago is made up of around 130 islands, with some of them being very small. There are eight main islands. The islands, their nicknames and their official colors are:

The Hawaiian Islands have a population of around one million people. It is a very popular destination for tourists because of the active and dormant volcanoes, tropical climate, gorgeous beaches, and great waves.

Being isolated, Hawaii has its own brand of culture and language, with influences from North America and Asia. A few things make Hawaii unique:

Exploring the Origins of English Words

Now that you know about some of the words associated with Hawaii that are often used in the English language, you’re probably wondering if any other words in the English are derived from other languages. The answer to that question is yes. It can be really fascinating to explore English words of foreign origin. Explore a list of English words of Japanese origins to start learning more.