List of English Words of Hindi or Urdu Origin 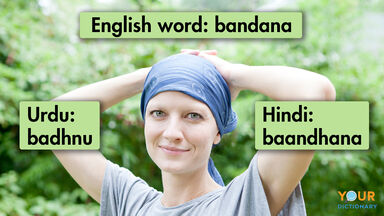 List of English Words of Hindi or Urdu Origin

Explore a few Hindi and Urdu words that have made their way into the English language:

Many Hindi and Urdu words have Sanskrit roots. Hindi is a blanket term for many languages and dialects spoken in Pakistan, India, Surinam, Fiji, and Mauritius. Urdu is one of the two national languages of Pakistan.

Since you have a list of English words of Hindi or Urdu origin, maybe you would like a little information about the primary countries (India and Pakistan) where these languages are spoken.

Hindi is the primary language for several states within India, but it is not the only language spoken in India. Many people in India speak Urdu. India is called the Republic of India and is found in South Asia. It is the most populated democratic country in the world with over a billion people. Its land borders are China, Nepal, Pakistan, Bhutan, Burma, and Bangladesh. Its water borders are the Indian Ocean, the Bay of Bengal and the Arabian Sea. The Himalayan Mountains are partially in India. Mount Everest, which is in the Himalayas, is north of India, in Nepal. Learn more about the country with some fun facts about India.

Many words in the English language are derived from other languages. If you love these languages, explore some essential and beautiful Hindi words. Now that you know some of the English words derived from Hindi and Urdu, chances are you’re wondering what other terms you use regularly that actually originate from another language. Expand your horizons by exploring a list of English words of foreign origin. From there, move on to learning about root word definitions and meanings.