Did you know there are several English words of Russian origin? Languages have borrowed words from each other for centuries and still do today. While many English words are derived from ancient Latin and Germanic languages, there are also loanwords from other languages, including Russian. After Russia became a world power, more Russian words made their way into other languages such as English. Discover a few Russian words used in English that you may have encountered. 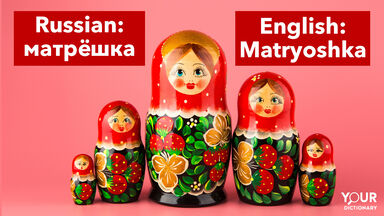 Several foods enjoyed around the world come from Russia. Here are a few favorites:

Few countries have a political history as rich and tumultuous as Russia. Due to this history, many topical political terms originated in the Russian language.

Russia has given us several inventions and, by extension, interesting words and terms.

Russia has a rich fashion history and some clothing items and terms have become popular in English as well.

Some animals native to Russia have lent their names to English.

Words of Russian Origin: Explore the Language and Culture

Russia is certainly a fascinating country that has lent interesting words to the English language. To hear some of these Russian loanwords in their original Russian form, listen to a native speaker pronounce them. If you are interested in studying the Russian language, explore a list of Russian dictionaries to help you get started.