In today's world, English has become a universal language, with most business transactions and scientific research being carried out in English. Not only is it spoken as a second language by millions around the world, but many of its words have also found their way into foreign languages. However, you may be surprised to learn that there are many English words of Spanish origin. Discover some examples of English words borrowed from Spanish. 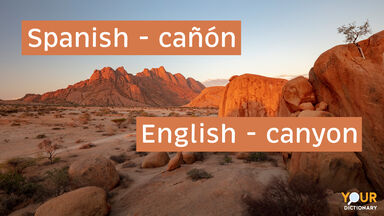 Animal Names That Originate From Spanish

Many animal names we use on a daily basis are English words with Spanish origins.

Many around the world enjoy cuisines and beverages from Spanish-speaking nations, and they also use the Spanish names for these foods and drinks.

Names of Places and Events Derived From Spanish

Whether you are taking a siesta outside on your patio or standing in line at a cafeteria, you are unconsciously using Spanish loanwords for places and events.

Several terms to describe the weather, landscapes and other natural phenomena also derive from Spanish.

Spanish Words for People and Professions

Spanish also gave us some titles and descriptions you’ve likely come across in history class or daily life.

Borrowing words is just one of the many ways in which languages can expand their vocabulary. The words above are just a few examples, but look closer and you'll find that English has actually borrowed quite a few words from Spanish over the years, as well as many other languages. In some cases, these "loanwords" can undergo some transformations that help them assimilate better into the new language.

Spanish is the official language of 20 countries and is spoken by over 500 million people across the globe. People around the world study Spanish, use it in personal, business or academic settings and enjoy the culture, foods and language of Spanish-speaking countries. You can hear the words above in their native Spanish or download Spanish worksheets to aid you in your language learning journey.