The English language has many terms from other languages that have been integrated into common speech, including English words which have a Yiddish origin. You will probably be amazed at some of the English words from Yiddish. Get a clear list of Yiddish words used in English with definitions. 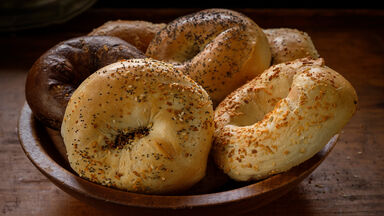 Perhaps the most widely known Yiddish word which has become a part of everyday English language is the exclamation, "Oy vey," proclaimed by a person who is in a predicament or facing pain, horror, or grief. Many times, this exclamation is shortened to be simply "Oy." This word has become such a commonplace expression that almost no one is ignorant of its meaning.

Even though, oy, may be the widest known Yiddish word in English, it certainly isn't the only word. Some of the words used from Yiddish are derogatory in nature, but they are used to avoid typical English vulgarities. A list of English words with Yiddish origins include:

Most Americans have heard all these more common words but may not know that each comes from Yiddish. For example, a salesperson always tries to give you a spiel. And you’ve probably met a schmuck or two in your lifetime.

While many words are used in both English and Yiddish, they often have different connotations. For example:

Yiddish should not be confused with the Hebrew language. Yiddish comes from the Jews that inhabited Central and Eastern Europe. The earliest record of Yiddish as a language dates back to the 10th century. It was a universal language to aid the Jews in communicating with each other from geographically diverse areas.

Roots and Structure of Yiddish

Yiddish is a hybrid language and takes much of its vocabulary from medieval German and Hebrew, but with a smattering of words from Aramaic, Slavic, and Romance languages as well. Many of the words come from the specific cultures within Central and Eastern Europe.

Yiddish has a structure all its own. While the language is based on a mixture of Hebrew and medieval German, its alphabet is based on the Hebrew alphabet. The rules of Yiddish are not the same as either of the parent languages.

Yiddish went through a decline in popularity over the past 100 years but has found resurgence in recent times and is taught at a number of prominent universities around the world. Next time you use a word of Yiddish origin, remember that you are speaking a foreign language.

The United States has been called the "Great Melting Pot" due to the huge influx of immigrants during the early part of the 20th century. As people poured into America from all over the globe, many new words began to creep into the English language. Almost a century later, the origins of some of these words have been lost, but the words remain part of everyday speech. The globalization of the English language in this century has further introduced words from other countries and cultures. Therefore, you’ve been speaking Yiddish terms without even realizing it.

Interested in learning more words with origins in other languages? Explore this list of beautiful Latin words.