Collective names for groups of animals are said to date back to medieval times, which may explain why some of these names can be strange, surprising or downright funny to us, such as an unkindness of ravens. In the spirit of the fanciful language used by our ancestors, more modern terms for animal groups can have a fun twist, like a crash of rhinoceroses. 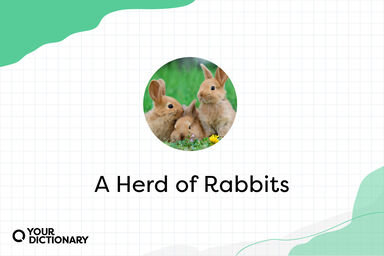 Herd With Group of Rabbits

Whether it is a group of mammals, birds or even insects, there is a unique collective noun to identify the specific group, although some of these names are rarely used. Most people are likely to use the general term flock for a group of eagles, rather than the proper term convocation. Still, it's good to know the correct collective noun, even if it's just to wow your friends.

We've gathered together a list of 60 groups of animals and their collective nouns - some animal groups can have more than one collective noun - that you may or may not have heard of. Whenever animals gather in groups, they are formally called:

To expand your vocabulary even more, YourDictionary can help you learn some animal names in Spanish.

Not only is it fun to say certain names for groups of animals, but it is interesting as well. The collective names given to groups of animals can be as unique as the animals themselves and highlight certain traits of that group. Remember that, and when you think of a group of skunks the word stench should immediately come to mind.

Our list is by no means exhaustive, so please share more collective nouns for groups of animals in the comments below. And for a little light relief after learning that list check out our funny animal puns slideshow.