Whether you are interested in exploring more about the sea or looking for ocean words to use as a vocabulary for your class, having a comprehensive list of ocean words can be handy. Dive into the deep depths of the ocean through some unique and interesting ocean vocabulary covering beaches, creatures, seas, plants, and more. 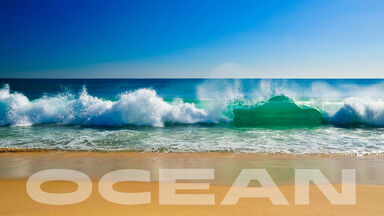 Words to Describe the Ocean

The oceans and seas are vast. They are full of wonders that we are still discovering. In fact, the National Ocean Service points out that more than 80% of the ocean is unknown. Could you imagine those crazy wonders hiding in the deep depths? Well, there are a few areas that are known. Dive into a list of common sea and ocean words!

Plants Associated With the Ocean

When it comes to the vegetation filling our waters, it is unique to say the least. One of the heroes of the deep sea is plankton, which is made up of tiny plants and animals floating with the sea. These microscopic wonders set up the base for the marine ecosystem. While there are different species out there, plankton typically fall into two different types: zooplankton (animals) and phytoplankton (plants). Beyond just the food chain superstars, you also have wonders like the Great Barrier Reef. Splash around a few other plants of the ocean words like:

Creatures of the Ocean and Sea

It's time to swim down in the depths now by looking at sea creature words. Not only do you have the unicorn of the sea in a narwhal but unique array of all different kinds of fish. There are even those really creepy creatures that only in the darkest depths like the anglerfish with its glowing lure. Wade in with some other fun ocean creature words in this list.

Name of the Oceans and Seas

When you talk about oceans, here’s where it gets a little tricky. There is actually only one global ocean. However, there are five basins, which you call the oceans. These are Arctic, Atlantic, Indian, Pacific, and Southern oceans. While you might think there are only seven seas, there are a lot more. There are actually more than 50 seas in the world. Some of the seas you might find include:

Words Associated With the Ocean and Beach

While an ocean is made up of water, it connects with a land mass eventually. It might connect with small land masses to create a series of islands like the Pacific Islands. Or, it might connect with one of the seven continents. Where the ocean meets land, you have a beach. Not only are those beaches filled with creatures, but you can find other fun ocean landforms and words, such as:

Since you can’t walk on water, you have to navigate the ocean somehow. Thankfully, there are all kinds of fun ocean vehicles you can come across. Just a few of the boats or ships you might encounter in an ocean include:

The ocean is full of unique and interesting things, from the saltwater itself to the creatures found above and below the surface. Considering much of the ocean is undiscovered, it kind of makes you want to dive right in and explore it. Thankfully, you can. Right from the comfort of your own home through ocean and sea examples. Then, you can explore other bodies of water, like ponds and lakes.