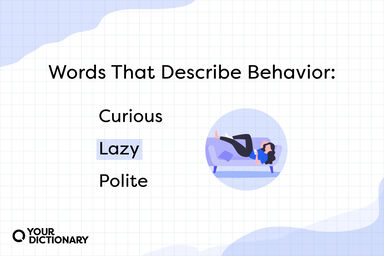 Task-oriented behavior describes how someone behaves when they are given a project or an assignment to work on. Do they make detailed plans for how to proceed? Do they prefer to jump right in and see where the work takes them?

Examples of words to describe task-oriented behavior with a positive connotation include:

Some examples words to describe task-oriented behavior with negative connotation include:

Positive relationship-oriented behaviors may be described as:

Negative relationship-oriented behaviors may be described as:

Relationship-oriented behavior is often affected by gender stereotypes. For example, women are socialized to see themselves as nurturing and peacemaking in their relationships while men are taught to value displays of leadership and authority.

Words that describe introverted behavior sometimes have a negative connotation, but the behaviors themselves are neutral. Introverted individuals do not dislike people. They simply prefer to spend the majority of their time engaged in solitary activities. Writers, artists, sculptors, scientists, and engineers often display introverted behaviors, yet make significant contributions to society with their work.

Words that describe extroverted behavior include:

Extroverted behaviors are neither inherently positive nor negative, but extroverted individuals often fall into leadership roles due to their enjoyment of being around large groups of people. Extroverts are comfortable being the center of attention, which is a prerequisite for any leadership position.

Behaviors Fall on a Spectrum

Behavior can often vary depending upon a person's mood or situation, with actions falling at opposite ends of the spectrum when one or more variables are changed. Even the most popular personality tests caution against drawing too many conclusions from limited data.

As you're describing someone's behavior, it's best to choose words that paint a broad picture of his or her actions. Avoid descriptions that make unnecessary categorizations.