YourDictionary can help. We’ve brought together lists of words that describe the United States, and provided a few hints to help you think of more. 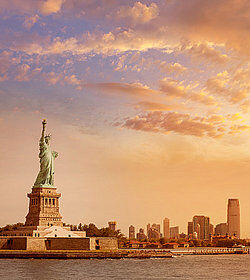 The Statue of Liberty in New York City
Advertisement

For many people outside the United States (unless they’re from Russia, Canada or China, because they’re bigger), the first word that comes to mind about the USA is big:

Another important word for America is diverse. Native Americans were here first, but everyone else in the US was an immigrant from somewhere else. That has made the United States a cultural melting pot, a place where people from all over the world come, connect, and create things that couldn’t have happened anywhere but America. Here is a list of words that describe society in the United States:

The United States celebrates its immigrant origin in music and the arts. With music styles as varied as bluegrass, jazz, and heavy metal - based on rhythm and instruments from all over the world - American music expresses the diversity of the country.

Even more than music, television and Hollywood movies present an image of America to the whole world. American cinema is one of the oldest and most successful in the world, and American TV shows are watched by billions of people.

Here is a list of words that describe the music, art, and entertainment of the United States:

Even when they occur in other places, some are classically American:

The United States is a democratic republic. That means every American adult gets a vote, and those voters choose people to represent them in government. The government is based on the US Constitution, which guarantees Americans legal rights enforced by the courts. America also has lots of symbols for itself.

Here are a few of those symbols:

Here are some other words that describe the American government:

The motto on the Great Seal of the United States sums up the country. It means “out of many, one.” Not only that, but the motto is in Latin, a language that not one American ever spoke natively! That’s America. The United States is made up of countless parts, most of them from other places. Some are good, some not so good, but all of them are part of what makes up the country. These words represent that.