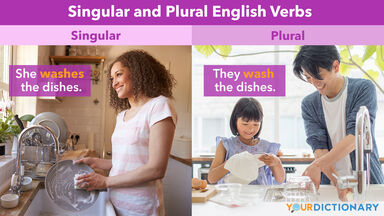 Use singular verbs for third-person nouns and pronouns (he, she, it), as well as collective nouns such as "team" or "family." When you use the pronouns I and you, use the base form of the verb (I bake, you bake), just like you do for plural verbs.

Looking for a printable chart of common irregular verbs? Included below is a list for reference or to post in a classroom.

Most regular verbs can be made singular by adding -s only. Some of these verbs include:

Some verbs add -es when changed to a singular form from the base form. These verbs typically end in -ch, -o, -s, -sh, -x, or -z. They include:

Singular Verbs That Change From -y to -ies

Verbs that end in a consonant and -y change to -ies in singular form. For example:

There is a small group of verbs that end in -y but don't change to -ies. That's because they end in a vowel and -y, not a consonant and -y. In these cases, you only add an -s. For example:

There are only a few verbs that fall into this category, but they're very important. The verbs "to be" and "to have" are fundamental to the other verb tenses in English.

Singular and Plural Verbs in Other Tenses

Using the correct verb form for subject-verb agreement makes your writing easier to understand. The more you review these verb forms, the more you'll spot them in everyday language and be better prepared you'll be to use them effectively. If at any point, you start to get turned around, you can always review these rules for conjugating verbs.