What Words Describe War in a Powerful Way?

Are you wondering what words describe war? If you’re writing a paper or story that discusses war, it’s critical that you choose the right descriptive words to convey the aspects of war discussed in the text. Discover many words that can be used to describe different elements of war. 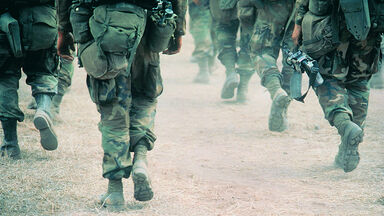 Words That Describe Types of War

There are many types of war and warfare. Include terminology in your writing that helps readers understand what type of war or warfare you’re discussing.

Wars are typically fought using multiple strategies and can even take place on multiple fronts. Include powerful words in your work to provide readers with insights related to the experience of being a wartime soldier.

Words to Describe Weapons or Tools of War

Many weapons and tools are used in times of war. Discover powerful terms to describe these items.

Sometimes the most powerful words for war are not about the types of battles, tools or tactics, but of the effects felt throughout the area where the war is being waged. Explore terms that describe the impact of wartime and being in a war zone.

A number of terms describe the many circumstances that can lead to the end of a war or a temporary pause in the conflict.

When you want to describe war in a way that has a powerful impact, you may want to consider using a word in a language other than English.

Use this list of descriptive words to help you decide how to best express what you want to say about war. If you are discussing where a war is set, consider adding some words that describe places. If you’re more focused on the overall tone of the piece, review some examples of tone in a story for inspiration. Whatever your area of focus, identifying the most suitable descriptive words will improve the overall quality of your work.