40+ Other Ways to Say 'For Example' & Liven Up Your Writing

There are many situations where the phrase "for example" can be used in writing. It's a great phrase, but if you need to use it several times in the same document the text can start to sound repetitive. Fortunately, there are a number of other phrases you can use that mean essentially the same thing, depending on context. Discover 40 other ways to say "for example," along with examples of each option in a sentence. 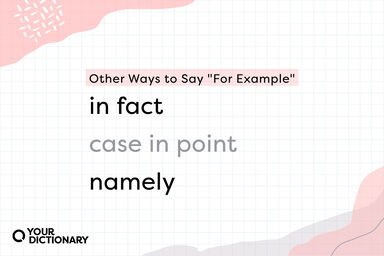 Other ways to say for example
Advertisement

Abbreviations to Substitute for "For Example"

Two Latin phrase abbreviations (i.e. and e.g.) are commonly used as other ways to say "for example" in written documents or presentations. These abbreviations are most common in formal documents, such as academic or legal writing.

One Word Alternatives to "For Example"

There are a few single-word alternatives to using the phrase "for example" in writing. These terms are essentially synonyms for "for example."

Two Word Substitutions for "For Example"

There are quite a few two-word phrases that can be used instead of continually repeating "for example" in your writing.

Longer Phrases to Use Instead of "For Example"

Some of the phrases that can be used in place of "for example" in writing have more words than the original phrase. Even though concise writing is important, it can be a good idea to use these longer phrases in order to avoid repetition and liven up your writing.

When writing, reader engagement is always an important consideration. Documents or stories that use the same phrases over and over can be boring and hard to read. Avoid getting too wordy, but do work in some variety in phrasing so that readers won't lose interest. While you're exploring other ways to say common phrases, consider other factors that contribute to quality writing. Start by exploring what effective written communication really is.