Big Words to Use for Impressive Speaking & Writing

Whether you’re writing an essay or speaking in front of a group, there are certain big words you can use to impress your audience. Big words don’t actually have to be long; instead, they are precise and perfectly express what you’re trying to say. Before your next speech or paper, take a moment to familiarize yourself with these terms so you’ll be able to replace boring words with these much more interesting big words. 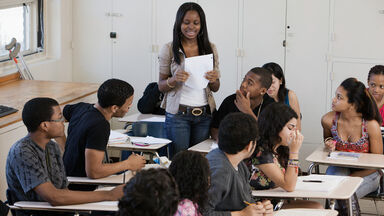 Big Words for Speeches and Debates

If you’re speaking in front of an audience or participating in a debate, take a moment to look at this word list. Substituting a big word gives your speech more power.

Academic writing requires thoughtful word choice, and there are a few big words you can substitute for more common options.

Impressive creative writing relies on choosing the perfect word. It’s easy to use the same word repetitively, but there are bigger and better alternatives to try. Consider these:

Replace Common Words in Any Situation

Whether you’re speaking or writing, make an effort to replace common words with more descriptive alternatives. Take a look at words you can use instead of “some” and other choices to try instead of “very.” Simply swapping out the common words will make your writing more impressive.

Impress With a Great Vocabulary

If you want to expand your vocabulary, review a list of words to use if you want to sound smart. Add these to your speeches and essays as well, and you’ll be impressing everyone from teachers to friends.