How to Write a Ballad Poem Step by Step

Learning how to write a ballad is a great way to tell a story in verse or song. Once you understand the basic steps for composing this type of poem, you can create a ballad of any length. 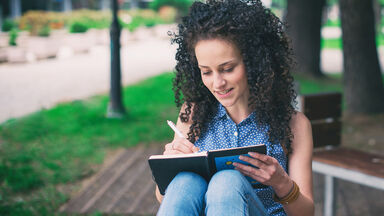 What Is the Format of a Ballad?

Traditionally, a ballad tells a story in a series of quatrains. As you can see by looking at examples of quatrains, they are four-line stanzas that often have a set rhyme scheme. Ballads are an ancient poetic form, and early poets wrote them to be sung instead of read. They have a musical quality that makes reading them a joy. Some ballads also include a refrain that is repeated.

Frequently, a ballad rhymes ABAB or ABCB, but if you’re writing your own, you can decide on the rhyme scheme. There are no hard-and-fast rules.

Many ballads use iambic meter, meaning they have a combination of alternating unstressed and stressed syllables. This gives them that sing-song quality. Again, you can use any meter you like for your ballad since there are no rules.

How to Write a Ballad in 7 Steps

Writing your own ballad is easy once you have a basic understanding of the process. It starts with the story you want to tell.

A ballad is a narrative poem. The story your ballad tells can be true, or it can be a work of fiction. As the writer, the choice is yours. However, it’s essential you choose a story that has plenty of action and feels exciting for you to write. Here are a few great topics to consider:

For example, you could choose to write a ballad about the sinking of the Titanic. This event has plenty of excitement and offers room for a long story to unfold.

2. Write the Story as Prose First

Before you begin writing a ballad as a poem, take some time to write the story as prose. Decide on the plot of the story. Settle on a point of view and some characters. Tell what happens from start to finish, including important details and descriptions. Edit the story until it includes only the most essential and exciting parts. Then find some spots where the story could naturally be divided into stanzas.

If you were to write a ballad about the sinking of the Titanic, you could detail the events that happened during the ship’s last hours and days. In this example, each sentence offers a natural stanza break:

The Titanic set sail on April 10, 1912 and sank on April 15. Although people claimed the ship was unsinkable, it was designed with baffles that could fill with water quickly and create a cascade of destruction within the body of the ship. After striking an iceberg at 11:40pm, the ship began to take on water. The crew decided it was sinking and deployed the lifeboats, but there were not enough boats for everyone.

3. Decide on the Format for Your Ballad

Your ballad will need to have quatrains and some type of rhyme scheme, but beyond that, the format is up to you. Look at different examples of rhyme to choose the one that fits your story best. Consider the meter you plan to use for your ballad as well. Once you’ve decided on a format, don’t change it. This will save you time and effort.

For a poem about the Titanic, you might take inspiration from Henry Wadsworth Longfellow’s ballad, “The Wreck of the Hesperus.” That famous shipwreck poem is written in loose iambic tetrameter and rhymes ABCB:

It was the schooner Hesperus,

That sailed the wintry sea;

And the skipper had taken his little daughtèr,

To bear him company.

Blue were her eyes as the fairy-flax,

And her bosom white as the hawthorn buds,

That ope’ in the month of May.

The skipper he stood beside the helm,

His pipe was in his mouth,

And he watched how the veering flaw did blow

4. Pick the Right Place to Start

The first line of your ballad is very important. You need to capture the reader’s attention right away, and one of the best ways to do that is to start at an exciting point in the story. You can fill in background details later, once the reader is listening.

In writing a ballad about the Titanic, it’s worth noting that there are two very exciting moments in the story: hitting the iceberg and sinking. The iceberg is an inciting incident, the point where the story is set into motion. This is an excellent spot to start your ballad:

A hundred years and more have passed

With an iceberg one Atlantic night.

Great imagery is essential in a ballad. As you work, think about how you can describe things using your senses. How does it look and feel? What is a character tasting or smelling? Use vivid descriptions to make your reader understand what it’s like for the characters.

In the Titanic ballad, there are plenty of sensory details to include. You could introduce a character after the introductory stanza and describe the ship and weather through that character’s perspective, using lots of great imagery:

The weather was fair and the gangplank sound

And Lucy held tight to the gleaming rail.

The seawind whipped her curls astray,

As the ship prepared to sail.

6. Keep Working Within the Form

A poetic form like a ballad can feel limiting at first, but it’s also a way for you to tell your story in a set format. Don’t force the rhymes or rhythms you need for your ballad. Instead, try rewording each stanza to make it work. You may even want to choose the rhyming words first and fill in the story around those. Keep going until you’ve told the whole story.

In the example of a ballad about the Titanic, you could choose two words for your B lines of the rhyme scheme. For instance, you might choose “seas” and then find a good rhyme for it, such as “knees.”

“Unsinkable,” they said she was,

The safest ship to ride the seas,

But Lucy could feel the engines tremble

When you’ve finished writing, take some time to read the ballad out loud. It should flow naturally and sound a little like a song. If there are places that you stumble or spots that just sound awkward, rewrite them to make them flow. Beautiful, melodious language is called euphony, and you can check out some euphony examples to give you ideas on how to make your ballad sound more musical.

Ballad Examples to Inspire You

One of the easiest ways to learn how to write a ballad is to look at ballad examples. Poets have been using this beautiful form to tell stories for centuries, and with practice, you can too.