You famously have to break some eggs to make one, but knowing whether it’s omelet or omelette can be extremely confusing. It’s enough to scramble anyone’s brains, but they do thankfully mean the same thing. Omelet just happens to be preferred in the U.S., while omelette is preferred in the U.K. and Europe. Who was the practical yolker who made two versions of the same word? 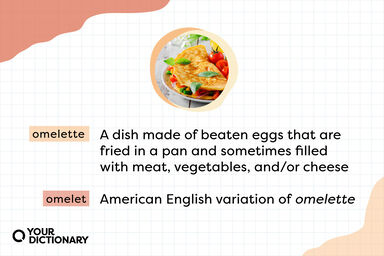 Omelet on a plate With Omelet vs Omelette Definitions
Advertisement

"Omelet" or "Omelette": Which Is Correct?

Both omelet and omelette refer to a food made of beaten eggs heated in a pan, usually with meat, vegetables, and other fillings folded into the eggs.

Neither spelling is wrong. Omelette is simply preferred in British English, but omelet is more common in American English.

How To Pronounce “Omelette” and “Omelet”

Despite the different spellings, omelette and omelet are pronounced the same way (ahm-let). However, the French version of the word makes use of all the letters and syllables in the word: oh-muh-let.

"Omelette" or "Omelet": Which Should You Use?

It’s ultimately fine to use either omelet or omelette. The AP Stylebook may prefer omelet. However, looking at Google Trends, even people in the U.S. seem to be more interested in omelette over its shorter spelling.

You may see omelette used when referring specifically to French omelettes, but this isn’t a set rule.

Whichever spelling you choose, make sure you stay consistent with that spelling throughout your piece of writing. Changing spellings midway can contribute to confusion.

The Origin of “Omelet” and “Omelette”

Countless cultures throughout history have created some version of what we know as an omelet. It turns out many people all over the globe learned that beating some eggs, putting them into a pan, and adding some optional fillings was a delicious choice.

The word omelette is French in origin. Exact dates vary, but it was reportedly first used in print in the late 17th century. According to the Oxford English Dictionary, even the French had prior variations, including aumelete, aumelette, amelette, and alemette. This may have come as a modification of the Latin word lamella, meaning a thin plate, layer, or film.

The British and Europeans adopted that original French spelling of omelette. Americans adopted the word but shortened it, removing the last -te. The exact reason for that shortening is unknown.

While all versions of omelets comprise eggs cooked in a pan, there are some notable variations.

The one that seemingly started it all, the French omelette is a bit more delicate than what people in the States might be used to. The outside is meant to be silky smooth without any browning, while the insides are closer to runny than done and feature few (if any) extra fillings. French omelettes also tend to be folded into an oval or roll.

Unlike its French sibling, the American omelet is meant to have a golden crust, and it’s usually packed to the gills with fillings. It’s also typically folded in half just once, creating a half-moon shape.

The most common variation of an American omelet is the Denver omelet, also known as a western omelet. The Denver omelet can come in various forms, but it’s mostly noted for its classic fillings: green peppers, onions, cheese, and diced ham.