What Are Supporting Details?

The term supporting details can be defined as additional information that explains, defines or proves an idea. The term might sound simple, but because this concept is so important in many types of writing or speaking, it’s highly recommended that you make sure you understand exactly what it entails. Learn more about what supporting details are and review some examples. 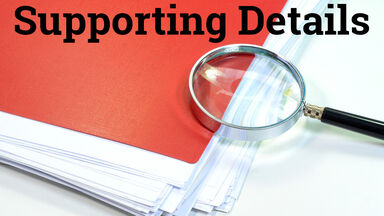 What are supporting details? Whether you're explaining a situation, telling a story or doing any other kind of writing, it's important to know the answer to this question. Whether you’re writing a research paper, making a sales pitch, or defending yourself in court, you should never underestimate the importance of providing the factual details to support your claims or ideas.

Supporting details are pieces of factual information that back up the main idea(s) you are trying to convey. These details clarify the main idea you are describing and bring it into clear focus for those who are reading your writing or listening to what you are saying.

Supporting details can be any kind of facts that help to develop or support the main idea you are trying to convey.

Supporting details aren’t just meant to give more information about a situation — they’re also meant, literally, to support your point, meaning that without them, you may not succeed in making your argument successfully. Using supporting details properly could be crucial in a variety of situations, whether you’re defending your innocence or just your thesis statement.

Imagine that you find yourself in court fighting a traffic charge. The other driver was at fault in the wreck, but he is trying to claim that you were to blame. The two of you could go into court and simply argue back and forth. This could go on forever, and how would the judge ever know who was telling the truth? Without any solid, clear evidence in one direction or the other, it would be virtually impossible to tell.

Now imagine, however, that the other driver caused the accident because he was talking on his cell phone. You could certainly go to court and simply tell the judge that the other driver was distracted and this led to the wreck, but why would the judge believe you? Telling the judge that the driver was, in fact, on his phone would be providing him with essential supporting details. Ideally, you could even have the driver’s phone records brought into court to prove he was on the phone at the time of the accident, thus providing even more supporting details to bolster your claim. This is the kind of factual, detailed evidence that explains why you reached the conclusion that you reached, and helps provide a background that proves the veracity of your point.

In a less serious, but no less valid scenario, let’s say that you’re writing a research paper about how women are discriminated against in the job market. If you turn in a paper that simply states women are paid less and treated differently than male employees, no professor is going to be impressed. Sure, these are fairly well-publicized facts, but simply repeating them with no evidence to back yourself up isn’t exactly impressive — or convincing.

However, suppose you gather data from various statistical studies showing the differences in male versus female salaries. Suppose you interview female employees versus male ones at particular companies and get their personal testimonials about how their treatment has been biased. Suddenly you have a whole arsenal of supporting details that show your professor, and anyone reading your paper, that you didn’t just pull your claims out of thin air. This is the power of the right supporting details.

Examples: How to Write Supporting Details

The idea behind supporting details is simple; it’s all about providing information to explain and bolster your opinion, claim or belief. How did you reach the conclusion or opinion you reached? The surest, simplest way to convince someone else to see it your way is to provide them with the same information you used to reach that decision. Remember, it’s difficult to argue with the facts, and the more supporting details you can provide, the more evident it is that the facts are on your side. Now that you've explored the use of facts as supporting details, take the time to explore the difference between facts and opinions.