What Is a Claim in Writing? Examples of Argumentative Statements

Are you wondering, "What is a claim in writing?" When you make an argument in writing and back it up with supporting evidence, you are making a claim. Claims are very common in research papers and certain types of essays. 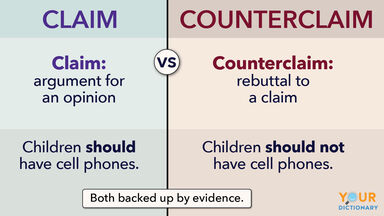 Argumentative claims don't have to be complex, but they do have to be more than just a fact-based statement that is obviously true. Instead, claims should be statements that are up for debate. As a writer, your goal is to effectively argue in favor of your claim. Review the examples below to develop a better understanding of what is a claim in an essay.

Types of Writing That Use Claims

Claims are common in different types of writing, including documents created for school assignments or in the professional world.

What Is Evidence in Writing?

In order to back up a claim in writing, you will need to provide evidence. Evidence is information that provides proof of or support for an idea. Your claim statement should be a logical conclusion that you reached as a result of reviewing and understanding valid, reliable evidence. Rather than expecting readers to simply believe that your claim is true, you'll need to provide them with evidence they can consider to reach their own conclusion.

There are many types of evidence:

It's important to be aware that the fact you can find evidence in favor of your claim does not necessarily mean that your claim is a factual statement. There is also just as much evidence against a claim as there is evidence for them. The idea of making a claim in writing is to present a logical, fact-based argument for the claim that you are making.

Review a few examples of argumentative claims to help clarify what is a claim in writing. These examples can help you identify claims when reading works of writing, as well as provide you with inspiration when you need to write a claim statement.

Note that the statements above are not commonly accepted facts. You may agree with some of these, but chances are that you don't agree with all of them. Each example above is a matter of opinion. If you write about any of these, you will need to back up with evidence in an effort to prove your point. Readers will decide whether or not they agree with your argument base on how effectively you make your point, as well as their own knowledge and/or opinion about the topic.

What to Include in a Claim Paragraph

What Is a Counterclaim in Writing?

Debates involve claims (arguments) and counterclaims (rebuttals). When people participate in a debate, they prepare arguments for their claims and deliver strong rebuttals to the claims of their opponents.

Now that you know what a claim is in writing, consider taking a deeper dive into how this communication strategy can be used in writing and face-to-face communication. Start by exploring key ways the terms argument and debate differ. From there, investigate how examples of rhetoric can be used as a tool to persuade and motivate.