The 1940s slang came out of a unique time when the United States was rebounding from the Great Depression and becoming embroiled in World War II, a situation that would actually help set up the economic growth the country enjoyed at the end of the decade. Many new slang words became part of everyday dialogue during this decade. 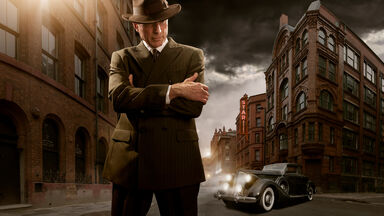 Examples of 1940s Slang for People

A lot of slang terms that became popular in the 1940s are still in use today. These terms were commonly used to describe people, based on certain characteristics or behaviors. Some are merely descriptive terms while others are slang insults.

Quite a few of the slang terms that developed during the 40s were created to describe positive outcomes, as well as feelings or actions.

Not all 40s slang is about positive circumstances. The vernacular of this decade also included some slang insults, as well as terms to describe negative situations.

The slang of the 1940s included some interesting new terms for everyday necessities, including terms for food, clothing and money, as well as ordinary activities like sleeping or making a phone call.

A few of the commonly used slang during the 1940s is associated with alcohol or drugs.

The history of American slang is fascinating. In the 1940s, film noir was at its peak in the United States. It was also a time of picking up the pieces after World War II, while forging new ground in technology, science, government intelligence and popular culture. It was the end of the golden age of swing, while jazz as we know it today was slowly coming to the forefront.

Slang By the Decade

Hopefully this list will help you to better understand 1940s slang. Look closely and you will see that many of these terms will not be new to you. Each decade ushers in new slang terms that become part of the popular culture. Now that you know some slang words and insults from the 1940s, make it a point to learn slang from some other decades. Start by going forward to the next decade and discover slang that became popular during the 1950s.