The history of American slang words is very interesting. Slang words are kind of like jargon; they are used in certain groups and understood by the group members. Let's look at some slang examples and see how they came about. 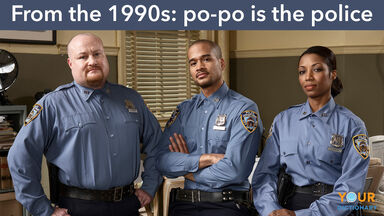 The slang of the United States has diverse origins, and it's impossible to identify the origin of it all. By definition, slang is informal and unofficial: there's rarely a stenographer around to record when a word first gets used in a new way. That said, there are a few consistent cultural themes that have shaped America's favorite old slang words.

For example, White Americans have been helping themselves to bits and pieces of African American and Black culture for years. More recently, mainstream America has raided LGTBQIA+ culture, particularly the slang origins of queer people of color, for new vocabulary. If you've found yourself saying snatched, slay, or drag her lately, give a" yas, queen" for your local drag artist.

Not all slang comes from the gradual processes of assimilation and appropriation, however. Some words and phrases are so powerful they simply appear in the language in response to the events that created them.

A subset of historical slang is artistic slang when slang words enter English from fiction. Just check out one of these authors, works of literature or TV series to see artistic slang.

Pure irony occurs throughout American slang. Americans love to reverse the meaning of words when using them as slang. They've been doing it for a surprisingly long time: bad meaning "good," a staple of 1980s standup comedy, has been a thing since 1897. Indeed, many words follow the same pattern of "negative definition, positive connotation": dope, radical, sick, and wicked are some notable examples.

Now that you've looked at a bit about the history of American slang, it's time to look at different slang words used by era. Many of these slang words are a work of the events and cultures of the time.

Explore a few different 1950s slang words that were popular during that era.

You'll notice that each different era builds its own repertoire of unique slang terms. See a snapshot of what sort of 60s slang you might have heard and used.

During the 1970s, things were a-changing. People started to rebel against the man and slang followed suit. Here's a taste of 1970s slang words.

Plenty of 1980s slang is still in common usage. Much of the history of 80s slang came into being from pop culture and slasher movies. You may recognize a few words that are still part of everyday speech.

Movies like Clueless and rap culture brought to life fun slang words and phrases in the 90s. See a few bits of 1990s slang for you to enjoy.

Slang from the 2000s is still making its way around the world today. You're likely to recognize a few of these from daily life.

Language constantly evolves and the meanings of words in it change, including slang words.

Slang is defined as an informal language with widespread usage. This way, our language renews itself and changes with the times. Slang words show the attitudes of the group or subculture that uses them.

Slang can appear as a brand new word, a new meaning for an existing word, an abbreviation for a word, or a word that becomes more generalized than its former, narrow meaning. It may help to go over what is not considered slang.

That said, like slang itself, the definition of what is and isn't slang is constantly evolving. In the case of American slang, in particular, to the first English-speaking settlers of America, any word not used in Britain was — by definition — slang. Over time, those words became a part of the common language.

The Nature of Slang

As G.K. Chesterton wrote in 1901, "All slang is metaphor, and all metaphor is poetry." Slang, including American slang, is descriptive, figurative and frankly beautiful despite, or perhaps because of, its messy and unofficial state. Read more about slang in our 30 examples of slang words. Since you've enjoyed the history of slang, you can check out the American Slang Dictionary.