Are you a spelling bee champion? Hardly anyone has reached the upper echelon of spelling, also known as the Scripps National Spelling Bee, so don’t feel bad if you’re not part of that particular hive. But that doesn’t mean you can’t use the winning words in conversation — and once you see the best ones, you’ll want to use them every day. 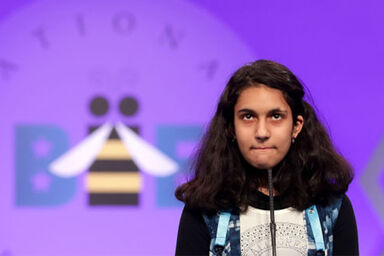 Ned G. Andrews won the 1994 Scripps Spelling Bee with antediluvian (ann-te-dih-LOO-vee-ann), which describes the Biblical time period between the fall of man in the Garden of Eden and the Great Flood (you know, Noah’s ark). While the word may seem hopelessly specific for everyday use, it has a connotation meaning “very old” that could prove more useful.

If someone called you cymotrichous (sie-mo-TRICK-iss), you may feel insulted. But this Greek-origin word just means “having wavy hair,” and Sukanya Roy spelled it correctly in the 2011 Scripps Spelling Bee. Use it in your next mushy letter (or text) to a wavy-haired would-be lover.

Likewise, the word esquamulose (es-QUA-myu-los) could actually be a compliment about your appearance — unless you’re a snake or a tortoise. It means “not having a scaly surface” (and is the antonym of squamulose, meaning “scaly surface”) and was co-champions Nettie Crawford and Mike Day’s winning word from 1962.

Does learning new words make you happy? Then you might say that it makes you eudaemonic (you-da-MON-ik) — something that brings pleasure. The 1960 Scripps Spelling Bee winner Henry Feldman surely felt eudaemonic after spelling that tricky word correctly.

Those who feel like spelling bees are inescapable traps, however, may resonate more with the word guetapens. It’s an English adaptation of the French guet-apens (“ambush”) and was Snigdha Nandipati’s winning word in 2012.

Another Biblical spelling bee winner is Laodicean (lay-ah-deh-SEE-an), which comes from the Book of Revelation. The word refers to the church of Laodicea being “lukewarm — neither hot nor cold” and has since come to mean “indifferent” or “halfhearted.” Kavya Shivashankar knew how to spell the word correctly in 2009, and likely didn’t feel very Laodicean about it.

“I have odontalgia” sounds properly dramatic for when you want some attention. But odontalgia (oh-don-TALL-jee-ah), Jon Pennington’s winning word from 1986, simply means “tooth pain.” Use it the next time someone asks you to do a tiresome chore — unless they’re a dentist or a spelling bee aficionado, they’ll probably let you off the hook.

The winning word of 2003 was pococurante (poh-koh-koo-RAHN-tay), which means “caring little.” The winner of the Scripps Spelling Bee, Sai Gunturi, may have recognized it as a character’s name in Voltaire’s Candide (Senator Pococurante) or may have correctly identified its Italian origin and spelling conventions. Either way, it’s unlikely that there was a pococurante in the house on that winning night.

Every spelling bee contestant wishes they had a bit of prospicience (pross-PISH-ence), if only to get a hint at the next word on the list. Prospicience, the winning word from 2002 spelled by Pratyush Buddiga, describes foresight or knowing something in advance. But it’s not exclusive to master spellers — we’d all like a peek at the future now and then.

If a tiny military platoon composed of rats doesn’t come to mind when you hear ratoon (ra-TOON), you’ve got a better vocabulary than most people, but maybe not as active an imagination. Ratoon actually means “a new shoot from a plant,” especially sugar cane or bananas, and was correctly spelled by 1966 winner Robert A. Wake (who knew his plant terminology from his rat platoons).

Do you love creating paper snowflakes during the winter (or any other time of year)? If so, you may be a fan of scherenschnitte (share-en-SHNIT-ah), the art of cutting paper into designs. Vanya Shivashankar spelled scherenschnitte correctly to become the 2015 co-champion with Gokul Venkatachalam.

Being buried alive is a surprisingly common fear in the 21st century, but it doesn’t have an equally common name. At least, it didn’t until 1996, when Wendy Guey spelled vivisepulture (vih-vih-SEP-uhl-chure), which describes the practice of burying someone alive. While you may not have too many occasions to use this one in everyday conversation, you could expertly drop it in a chat about fears.

More Words That Are the Bee’s Knees

For more anomalous and unparagoned words, check out: