Is It 'Could' or 'Couldn't' Care Less? Caring About the Difference

“I could care less about what Scott thinks,” you say, tossing your hair nonchalantly. Your friends nod in agreement — everyone except your grammar nerd friend who is secretly thinking “So you do actually care what Scott thinks.” Did you commit the common grammar sin of mixing up “could care less” and “couldn’t care less,” or did you accidentally reveal what you truly believe? 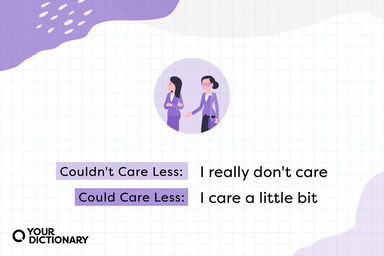 When you say “I couldn’t care less about what Scott thinks,” you’re saying you absolutely, positively do not care about Scott’s opinion. You couldn’t care less because you already care the minimum amount, which is zero. The same goes for could not without the contraction (and a more pointed emphasis).

Could Care Less: I Care a Little Bit

However, if you say “I could care less,” you’re indicating that you do care a tiny bit (or even more) because if you can care less, it’s not zero amount of caring. For example:

Does It Even Matter?

The phrase “could care less” is a lot more common than “couldn’t care less,” so how important could the difference really be? Quite important — depending on who you’re talking to.

If you’re with friends and you’re confident none of them are grammar sticklers, they’ll understand that you mean “I don’t care” when saying “I could care less.” However, if you’re writing a formal paper or email, you should get it right. A few tips to remember the difference include:

Other Ways to Express Apathy

There’s an easy way to avoid all this confusion — just rewrite the sentence. Go beyond “I don’t care” with great words and phrases like:

You Could Care a Lot Less About Grammar

Believe it or not, some people couldn’t care less about grammar rules (we were shocked too), but you don’t have to be one of them. Master tricky turns-of-phrase with: