Diction is based on the words a person chooses and the style in which those words are combined to convey meaning. Diction can be formal or informal. Many strong words can be used to describe diction within these broad categories. 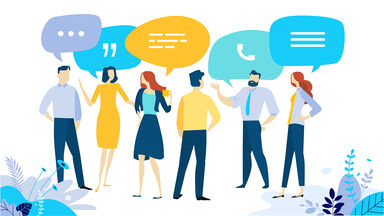 When using a formal approach to diction, people tend to use words and phrases as they were intended to be used. Formal diction involves providing context and using words or complete sentences that clearly convey the speaker’s meaning.

When a person uses concrete diction, the individual selects terms that allow readers or listeners to respond in a sensory way. By choosing specific words designed to elicit this type of response, the speaker or writer makes it possible for recipients to visualize what is being said with little to no room for misinterpretation. Concrete diction helps immerse listeners in the situation being described.

When using detached diction, a person or character will convey information with little to no emotion. The speaker could be describing a situation he or she is directly involved in, yet explain it as if the situation is not at all personal. Detached diction calls for a fact-based recitation of information without extraneous information. This approach can be described as clinical, removed, or unemotional.

A speaker that uses words in a manner consistent with their denotative meaning is taking a literal approach to diction. People who communicate in this manner select words with dictionary definitions that exactly match the message they wish to convey. There is no need to read between the lines or wonder about their true meaning or intent. They say exactly what they mean and mean what they say.

A person who uses pedantic diction tends to go to the extreme with providing detail in a way that comes across as tiresome or burdensome. Pedantic diction includes unnecessary and often obscure facts or trivia that the speaker may find important or interesting, yet actually comes across to others as off-putting.

A person who uses plain diction is one who focuses on conveying the basic facts of a situation and nothing more. A person who communicates in this way does not embellish and sensationalize information or convey excitement about what is being shared. This is a fact-based approach to communication. Individuals who regularly use this diction can be referred to as people “of few words.”

Using precise diction involves carefully selecting words that convey the exact meaning the person or character is trying to convey. When communicating with precise diction, a person wouldn’t say that he or she asked for help. The individual would use phrases like, requested help, implored for help, begged for help, pleaded for help, suggested that help might be beneficial, etc. This is sometimes referred to as exact diction.

A person who uses scholarly diction communicates in a manner appropriate for an academic setting. People who use this speech pattern outside of an academic setting may come across as if they are teaching or instructing others rather than conveying information in a conversational way. They typically come across as knowledgeable but stuffy to people who are not also communicating on a scholarly level.

People who use big words and overblown terms when it’s obvious they don’t really know what they are talking about or are trying very hard to sell an idea are using bombastic diction. This speech pattern can be equated to puffery or hype rather than substance..

When people use terms commonly associated with a particular geographic area, they are using colloquial diction. For example, if you are writing a story set in the Deep South region of the United States, characters local to the area should ask for a soda or a Coke when ordering a soft drink. They should not request a pop, as that term is not used to refer to a soft drink in that particular region.

A person who uses idiomatic diction chooses words and phrases that are likely only to be known or used in certain ways by people who are local to the area where a story is set. This type of diction can help convey that a character is native to, or very knowledgeable about, a specific area. This kind of diction can make it difficult for non-native speakers to understand what a person is saying.

Relying on special terminology and/or acronyms commonly used by people who work in the same occupation or industry is an example of jargon. This type of informal diction is appropriate for a speaker when communicating with others who also understand the specialized terminology. However, when speaking with people who don’t have the same expertise, using jargon can be a barrier to effective communication.

A character that uses pretentious diction is one who tries to sound like they know more than others, in a manner often described as putting on airs. People who speak this way try to come across to others as experts, though they often do not actually have much knowledge on the subject. People who speak in this manner are often viewed as condescending.

Slang is another type of informal diction. A person who uses slang tends to use newer terminology, including words that might not actually yet be recognized as “real” words in the dictionary. Texting slang is an example. Some slang, such as redneck slang words, is used in certain groups. Slang words don’t represent language that would be considered proper English.

The degree of formality isn’t the only defining characteristic for diction. If the type of diction you have in mind isn’t represented in one of the lists above, consider one of the following options.

Diction is an overall way of speaking used in a particular situation. It impacts how messages are interpreted and how speakers are viewed by others. Some people tend to use the same type of diction most of the time, while others tend to vary diction based on the situation, subject matter and audience. For writers, diction is critical to characterization, as the manner in which a character speaks provides readers with insights into his or her background, personality or other unique characteristics. Explore diction at a deeper level by reviewing some diction examples.